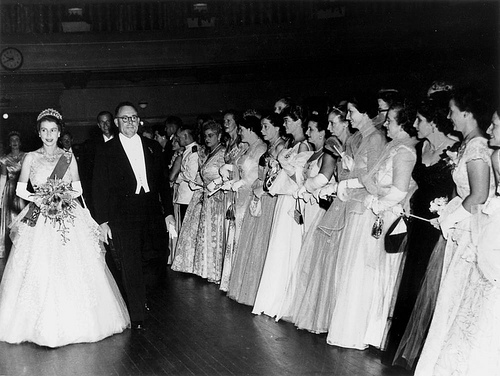 Her Majesty, Queen Elizabeth II has warned against a divided Europe whilst visiting Germany.

At the state banquet gathering held at Germany’s President Joachim Gauck’s residence, the Bellevue Palace, the Queen said: “In our lives, Mr President, we have seen the worst but also the best of our continent.

This was a speech by a monarch who at the age of 89 in 2015 has remained the Head of State during the WWII.

4A Law consider that Queen Elizabeth Warns Division in Europe is Dangerous because she was and remains Head of State since well before the Second World War (WWII). Queen Elizabeth II and the Lord Mayor of Brisbane …—State Library of Queensland Au… (Flickr.com)

“We have witnessed how quickly things can change for the better. But we know that we must work hard to maintain the benefits of the post-war world.

“We know that division in Europe is dangerous and that we must guard against it in the West as well as in the East of our continent. That remains a common endeavour.”

From our perspective, it is about time that British Prime Minister David Cameron heard these comments. We note in fact that David Cameron along with Germany’s Angela Merkel were also present at the state banquet and heard the Queen’s comments.

David Cameron is reported to be hoping that Angela Merkel will help him with his efforts to renegotiate Britain’s relationship with Europe.

Perhaps David Cameron ought to take heed from the Head of State and not steer Britain’s ship to murky waters and rough seas.

An article in which Queen Elizabeth warns Division in Europe is Dangerous appears in the international Business Times by Maria Khan Video by Alfred Joyner which goes further to refer to comments by the Gernamy’s President:

“Meanwhile, the German President said, reported Sky News: “We know that we need an effective European Union based on a stable foundation of shared values.

“A constructive dialogue on the reforms Britain wants to see is therefore essential. As a good partner, Germany will support this dialogue. For Britain is part of Europe. The European Union needs Britain.

“A united Europe, a strong European Union, represents stability, peace and freedom – for us all.”

The Queen is to remain in Germany until 26 June and will also visit the site of the Bergen-Belsen Nazi concentration camp. The camp was liberated by British forces on 13 April 1945.

The royal couple will also visit the memorial in the camp dedicated to Anne Frank, whose diary detailing the family’s years spent in hiding in Amsterdam during the Nazi occupation was published after the war.”

Certainly from the business and immigration perspective it is likely to be far more costly. British people are unlikely to be able to go on holiday and do business in Europe without a lot more time being wasted in bureaucracy. All because some people think that it is better to be out of Europe simply because European judges and courts are less likely to pander to media.